The Hunter - A Dream of Healing

In my dream last night, I was traveling on the train to Canada. I had been assigned to go up and inspect a piece of mining equipment that failed and found myself sitting with a family of First Nations people consisting of a young woman, three children and a very old man. His skin was deeply tanned and wrinkled, his eyes were bright and sparkled when he spoke.

We were exchanging pleasantries and the family told me the following story.

The old man had once been a part of a community in a remote section of Canada in which his community made its living and sustenance hunting and trapping. For centuries they had lived this way and until very recently had been a very prosperous people. When young boys became of age, they were taken out into the wilderness and left overnight. In the morning, when they awoke, there would either be an arrow or a rolled fur laying next to where they slept. If an arrow, the young boy was taken into training by the elder hunters and trained in the skills of hunting. If the young boy was visited with a rolled fur, then he would be taken in by the trappers who would teach their skills to him. In this way, the community was able to always have enough meat to feed themselves and enough furs to trade and purchase the other things they needed to live.

When the old man was young he, like all the other boys in the village was taken out to the appointed spot in the woods and left with a small bundle and told to pray and fast and return to the village the next day. The next morning, however, he had been visited by neither an arrow nor a fur bundle. Instead, when he awoke, he discovered a small fox had curled up next to him and fallen fast asleep. He was very sad because this meant that he could never be either a hunter or trapper for his people. As he returned to the village, though, the fox followed him. At the edge of the village, the fox ran off back into the woods and the young boy was left to tell the elders his sad tale.

In actuality, he became both a hunter and a trapper, but was given a special gift. When his family needed meat, he went out to hunt and always came home with an animal. He never needed a weapon, as an animal would seek him out and after they met, would voluntarily give its life to the young hunter. When the family needed furs to trade in the market, the young boy was dispatched to bring back furs and in the same way, the animals would voluntarily give of themselves.

Over the years, the young man’s prowess became known throughout the region. The meat he brought back was always the most tender and freshest and of the best quality because the animal was at peace when it gave its life. His furs became famous because they never had trap markings or holes in them from where an arrow had pierced the flesh.

Eventually, the young man left the village and sought to go out into the greater world to discover what was beyond the village’s known world. I never found out why exactly he left or where he had been all these many years but he had recently been called back to the village by the current elders as the village had fallen on bad times.

Over the years, the village had fallen into a state of disrepair. The hunters and trappers had difficulty finding enough meat and furs to both sustain their families and trade with other villages. Many of the men had given up in despair and turned to alcohol which became a serious problem for not just the men, but for the young people. The women were experiencing an increase in difficulty with childbirth and had trouble maintaining the family in the old ways and there seemed to be nothing to replace the old ways with except hopelessness. The village dogs had gone wild and formed packs that would attack small children and all in the village were afraid of them.

I decided to accompany the old man and his young family back to the village, thinking I would come back to my professional work soon enough. When we left the train, we had to travel a great distance overland in southwest British Columbia until we came to a place where we had to catch a small, open-deck ferry across the water to another piece of land. From there we had to walk a good distance before we finally saw the village in the distance.

Suddenly there was a great noise as a pack of wild dogs rushed at us. The mother shielded her children, but the old man simply sat down in the middle of the road. As the dogs came nearer, they calmed and one slowly and with great caution approached us until he was nearly nose to nose with the old man. Sniffing, he sat down. The old man reached out and touched his head. As the two touched, a hummingbird landed on the dog’s head. It was 4:10 pm. 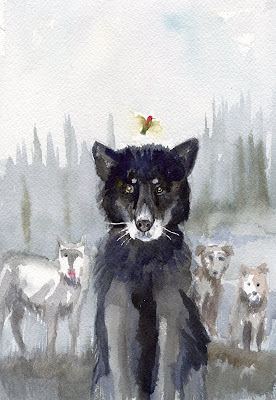 At the same time this happened, I received a text message on my phone from Mimi wishing I was home because the most incredible thing had just happened. She had captured a lovely picture of it. On our front porch, a large, boxer-type dog was sitting calmly with a hummingbird on its head.

There were sightings from all over North America at precisely the same time with dogs sitting peacefully as hummingbirds lit on their heads.

The man rose and calmly led the dogs and his family back into the village where there was a great healing amongst the people.

When I awoke, I lay for a long time re-playing this dream in my head, and a great calm washed over me as I finally drifted back to sleep.


NOTE: Paintings are by Mimi Boothby
Posted by Donald Boothby at 7:46 PM

what a powerful dream! I had to paint the dogs and birds that you described in such detail because I could see them as you described them.

I don't know what to say... it's a beautiful story. (The version you sent to me didn't have the last 2 sentences, and they are important!). I wonder if you recall changes in the light or color at any point(s) in the dream?

Not only do I want your cycling ability, I'll also take your dreams.

Wow what a detailed dream! What DID you eat night before??

That is a fascinating dream and Mimi's pictures are delightful.


Lee
An A to Z Co-Host
Tossing It Out
Twitter: @AprilA2Z
#atozchallenge
Blogging from A to Z

This is such a powerful dream, thank you for sharing it.

What a wonderful dream...wish I had dreams like that... :)

Wow! What an incredible dream!

I have had dreams that came true in odd ways but this is so detailed and unique, Makes you want to go back to sleep and find out what else happens...

What an amazing dream, and now you have those wonderful paintings to always remember it.

I was enthralled reading this! Amazing!

Truly a very beautiful dream .I loved your story and so glad you shared it with us here .Mimi did a lovely job on interpreting your inner visions; totally captivating art, both written and illustrated.
Annabelle ; )

OK I'm wiping the tears of happiness out of my eyes, this is a very powerful and touching healing dream! Mimi's paintings captured the magic perfectly!!!Deb

What a vivid and powerful dream (I think it is wonderful that Mimi captured it so beautifully with her painting.)

This dream should be made into an illustrated children's book. So evocative.

What a beautiful story and dream. Dream on!

What a wonderful dream, full of peace and power. Love her paintings, as well!

Shannon at The Warrior Muse, co-host of the 2012 #atozchallenge! Twitter: @AprilA2Z