My Ass Finds No Fault with New Asphalt

Monday, I had the opportunity to catch a 20 mile ride with my son Tom who is in town for a computer mathmetical geek get together for 4 days at the UofW campus. I picked him up on campus and we started our ride from near U Village. I'm still keeping my riding to the flats, as I continue my recovery from long and difficult surgery and the complications from it. The road back is pretty slow, but at least I'm able to get out when the weather warms up to 50 degrees and it isn't pouring down rain or snow. Those days have seemed to be few and far between this winter.

At any rate, we took off north, in serach of a burger, fries and a milkshake. There just happens to be a great place about 10 miles away (PERFECT!!!) in Kenmore. I've wanted to ride over the new section of the Burke Gilman Trail, having read that it is finally open. As Dave Niehaus would say, "MY OF MY". I can't tell you to break out the rye bread and mustard, but it felt somehow very smug and satisfied as I rode through Lake Forest Park, reflecting back on how goddam difficult it was to get past the dumbass politicians in that most stupid of all cities. The pavement is a couple feet wider than the old trail. The renovations have stripped old vegetation and there are a lot of new plantings and little water ditches to maintain the wetlands effect. Riding along through that new 2-1/2 mile stretch, we heard a couple of bald eagles calling to each other. We never saw them, but it was nice to know that they are enjoying our new trail also. Especially right in the center of the Lake Forest Park "downtown" it was fantastic. All of the roots have been removed, nice smooth, wide pavement now in place and the intersections have new, wider curb cuts making it much easier to navigate around pedestrians without either of us feeling like we were at risk.

At the 10 mile mark, we needed some lunch, so we pulled across to the other side of Bothell Way and made our pilgrimage to Kidd Valley, where we reminisced about how this was one of our primary stops back when we were training for STP. Hard sometimes to conceive of things so far back. I was working at the top of the hill at St. Thomas Center (now the home of Bastyr University) and one day, had Tom and Josiah ride from home out to meet me there for lunch. Tom was 11 and Josiah was 13 and it was the first time they ever did a 50 mile bike ride all by themselves. And now, here we were, nearly 2 decades later, much older, somewhat wiser and not a whole lot more grown up than we were then, munching down our cyclists power food. 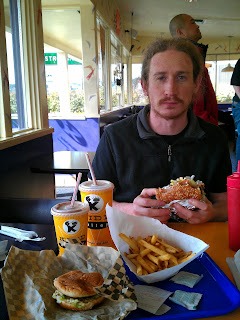 Believe it or not, Tom was smiling, even if only on the inside. He gave me a gift certificate for Christmas promising to do a bike ride with me every month from January through June. In January, he drove down from Coquitlam, BC on the last weekend of the month and we did 10 miles together. It was supposed to be 12.5 but I pooped out. He went home, got the truck and came back and picked Mimi (who refused to leave me sitting by myself by the side of the road) and me up. In February, I put my bike on the train, rode Amtrak to Vancouver, BC (what a fantastic way to travel to Vancouver!!!) and we did just a 4.4 mile ride around their neighborhood, but at least we got it in. So when I picked him up at the UW campus on Monday morning, with the sun shining and the thermometer in the truck saying 50 degrees, both he and I were smiling pretty good.

After our burgers, it was time to head back. Hmmmmm. No wonder it had been so pleasant riding to Kenmore. That headwind started blowing into our faces and I remembered why I usually try to ride INTO the wind on the first half of a ride. As we rode through LFP heading south, I noticed that at one of the two intersections, the pedestrian signal post is placed sort of awkwardly, splitting the lane in a very uncomfortable place. I think the accesses are wide enough that it is not a huge issue, but just sort of gave me a little bit of mental pause, and made me file it away for future reference so I make sure I slow down a little extra as I approach it. It is the first intersection as you're riding southbound (Ballinger Way).

After riding all that smooth asphalt, It was tough heading back onto the old section of trail. Hopefully, there are some plans underway to do some more upgrades between the University District and there, as several sections still have a lot of roots growing up through the pavement and are just starting to get into a pretty serious state of disrepair (the half-assed patch done where the slide happened 2 winters ago is a good example).

I do love the Burke Gilman Trail and look forward to a time when I can enjoy a nice smooth paved ride from downtown Issaquah to Golden Gardens Park. Now THAT will be a day worth celebrating. In the meantime, I'll just keep my sometimes very satisfied bum planted firmly in the saddle, enjoying the extreme pleasure of new asphalt every time it comes. Ahhhhhhhh. New asphalt AND a tailwind. If there is a heaven, I'm sure that is what it will be like.
Posted by Donald Boothby at 6:09 PM No comments: