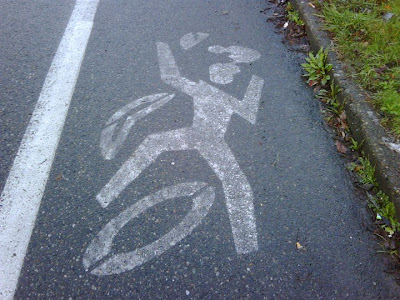 I wonder what it is in some people's psyche that causes them to choose to be aggressively mean instead of just going on about their day.

I'm riding along peacefully in a 8' wide bike lane along Alaskan Way. There is a single lane northbound, single lane south bound and center left turn lane. One of our wonderful "road diet" throughways in Seattle that is one of the most used cycling commute routes from West Seattle and the south end into downtown along the waterfront. Of course, being along our waterfront, it is also the main north/south corridor for all of the container traffic coming from the rail yards in the south end to the large container ships at the south end of downtown. The City has spend a bit of time and expense the past couple years making it better, but there are two long puddles that parallel the street when it rains, caused by the heavy truck traffic. Now, most of the time this is no problem. Everybody simply moves a little bit to the left as they come alongside a bike so as not to drown the cyclist. It all works very well, especially early in the morning when there's not much southbound traffic and rarely anybody in the center turn lane.

But every once in a while, there's that one guy who just HAS to aim right at the puddle, timing it just right so that he totally inundates the cyclist he's riding past. Am I paranoid? Do I think they're all out to get me? Not hardly. I know better. Well over 99% of the vehicles I deal with any given day are courteous, friendly, cautious and respectful. But then there's that rare individual.....

This morning was a really classic example. Fortunately, I'd dressed in full battle gear. I've left the light at Hanford and am headed northbound. Then there was a whole line of cars and trucks coming up from behind. I've placed myself as far to the right as I safely can in the bike lane. First up were a couple of container haulers. Then a concrete truck followed by a white school bus (prison bus on its way to the courthouse) I see frequently. Each of these vehicles moved cautiously out and to the left. It doesn't take much, not over a foot. But then there is a big ol' Chevy pickup. One of those raised up ones with big tires and loud diesel smokestack kinda pipes that get used sometimes to "fog" me. Well, this guy wasn't moving anywhere to the left. Even though four vehicles immediately in front of him managed to. Maybe it is my imagination, but he seemed to slow just a little bit, then romped on the accelerator as he went by me, hitting that puddle full on and managing to send a cascade of water fully engulfing me in his wake.

And as I rode on down the street, fussing and fuming about this dickhead, all I could do was be grateful that he hadn't hit me with his mirror.
Posted by Donald Boothby at 8:01 AM 5 comments:

How the Heck Did THAT Happen???

"Now let me get this straight," she said. "You got LOST riding from Seattle to PORTLAND????? How the *#%@ did you manage THAT?"

Well, its a long story that would put you all to sleep.

This was to be "month 2" on my quest to complete a 300k or better ride every month in 2012, and wanting to keep it in the lowlands I figured SIR's new permanent 0918 would be a good one, since I pretty much know where I'm going, it's relatively flat and even if I can't get any partners, I would be pretty safe. With a 4:30 am start, I figured to be in not later than 8, and would be able to do the only stretch of the route (Napavine to Castlerock) that doesn't have great shoulders and get across the Longview Bridge before dark. Good plan, but not such great execution it turns out.

All was going quite well, leaving right on time in a light mist which kept up for the first 37 miles. First faux pas? I forgot my water bottles. Fortunately, my house is close to the route and I was able to swing up the hill and get them. 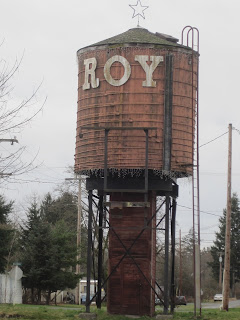 Leaving the first control in Sumner, the mist quit and it was dry until about 2:30 when I was up near Napavine. There was a pretty constant 5-7 mph headwind, but nothing severe, just enough to keep my legs burning the whole way. I love some of the little towns I go though, especially ones like Roy.

Coming into Centralia, the permanent route deviates from the Cascade STP route, taking you into Chehalis for the control. I needed calories before I got there and stopped for a burger at a little burger stand, then pushed on to the control, where I was actually able to remove a layer, as the temps had warmed, and now I was heading into the hilly part of the ride, and the cue sheet takes me off onto a bit of a different route into Napavine, Winlock and Vader. Not a lot different, but a "backdoor" approach. 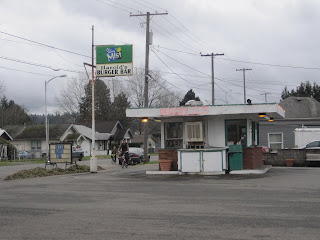 After crossing over I-5 the route takes Riverside Drive, which actually becomes something else, I can't remember what now, but then the cue sheet says "Cross SR-603 to go onto Brown Road - bends to the left". OK, I've been here before, I thought. This is where we did the wrong thing on our fleche a couple years ago and ended up in Toledo. I made the correct choice here, and Brown Road actually becomes something else, too. Then the cue sheets says "LEFT at Pleasant Valley Rd" followed by RIGHT at Tennessee Road, and then there are a bunch of other streets, roads and stuff.

OK, so I'm going along Brown Rd or whatever it is, I've gone up this excruciating 15% climb (I remember this from one year on STP when construction forced a change in the course), and I get to Pleasant Valley Road and make my right turn. I go 2.8 miles and am looking for Tennessee Road. The mist has come back, the temp has dropped a little bit and I've stopped to put my rainjacket back on. But where the heck is Tennessee Road? Geoff has been so good with distances here and my computer is right on the money for every twist and turn. OK, I think. Maybe back there where I was focused on the Burma Shave sign I missed it. So I head back. Nope. Not there. I ride along thinking that maybe it was back by that last farm. Nope. OK, now I'm getting frustrated, because I don't lose my bearings much. So instead of going BACK TO THE LAST TURN (1.1 miles) which is the classic rando solution to any orienteering problem, I think to myself, "well, maybe this is like a couple other turns where the road becomes something else." And I go all the way down to the end of the road, about 7 miles or so. I see a sign that says Chehalis to the right and Pe-Ell to the left. Wind is from the south, and even though it doesn't seem to make sense, the wind is coming from the Pe-Ell direction of the road. This is a major highway, but there is no road sign, so I don't know if 603, 508 or 6. So I go left toward Pe-Ell and ride a couple miles. Finally, I know I'm screwed. It is 3:00 and I'm 10 miles off course. I pull off and am trying to figure out what I should do, when a pretty woman (looks a lot like my friend Pam) drives up in an SUV with a roof rack (complete with Yakima carrier and bike carrier?) and rolls down her window. "You look lost." She says. "Big Time." I say. "Where are you trying to get to?" she says. I tell her and she says, "Oh baby! You're on the wrong side of a big hill."

I ended up taking Boistfort Road through Curtis 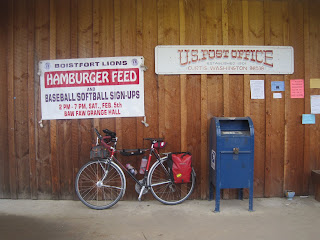 and through a very pleasant valley, saw elk, eagles, quiet streams and farmlands and then climbed (she was right) a big hill, dropping into Vader at 4:30 pm. I've DNF'd my 300, but had 145 miles. Mimi met me there and we had a "just ok" dinner before heading off to Hillsboro for our 100k the next day. 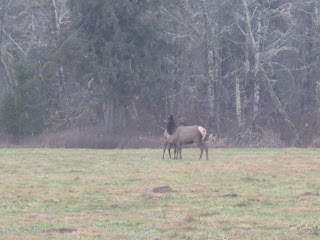 Sheesh..........how the heck do you get lost going from Seattle to Portland? Just ride with Raleighdon. He'll show ya.