So last night I'm riding home from work. I tell Mimi I want to ride long since I didn't get much of a ride in before work, and I'm heading out to the Duwamish, where I'm gonna ride down through Renton and back up along the lake. Everything is really lovely this week with temps in the mid-70's to mid-80's predicted all week. I have Mimi's new Pentax camera with me since I wore mine out (over 10,000 photos they all seem to quit functioning for some reason). I turn onto Spokane St. heading toward the bridge and hear a train coming. Not a problem since they are on tracks I don't have to cross and have their own bridge. I see a nice break in traffic that allows me to hop across 4 lanes of roadway onto the bike path/sidewalk going onto the swing bridge. I hear the bells start to ring, and think to myself they're gonna lower the train bridge. It is always up and I would really like to capture a shot of it down for a change, especially with Mt. Rainier so big and bright today with the winds we've been having to blow the smog away. Gorgeous afternoon!!! I start up the bridge and see the train approaching, but the bridge isn't moving. The bells keep ringing their warning, but no action yet. Then I see the sand barges. I think to myself that I should really stop and get a shot of this, as it is really beautiful out this afternoon. I generally will take 4 to 6 shots to make sure I have one I really like. I get almost to the top of the bridge and stop. Grab the camera and zoom in to get a good shot of the barges and mountain, since the train bridge isn't dropping (it's a single leaf drawspan) and had taken my first photo when I hear a voice on the loudspeaker. I don't think much of it, thinking it is coming from one of the boats below me. I'm getting ready to take another photo when I hear it again, only this time it sounds a bit irritated. Still don't give it much thought, but then I hear it again, "The bridge is preparing to open. The guy down there on the bridge with the bike needs to keep moving!!!!" OH, they're talking to ME! It's MY bridge that is getting ready to move, not the train bridge. I look behind me and the gate is closed. Oh, they're waiting for me to get off the Spokane St. Bridge (a double leaf "swing bridge") so they can open it for some big ship to go through. NOW I GET IT! So I carefully place my camera back into my jersey pocket, hitch up my shorts so they won't get caught on the saddle, straddle the top tube, click in, and ride off, waving merrily (with ALL of my fingers extended) to the bridge tender and ride off down the other side of the bridge. As soon as I was "almost" safely out of the way, he triggered the button to close the gate, and continued on with his work. I, of course, continued on down the exit from the bridge, turned sharp left onto West Marginal Way and went merrily along my way, satisfied with just one beautiful shot of the mountain. 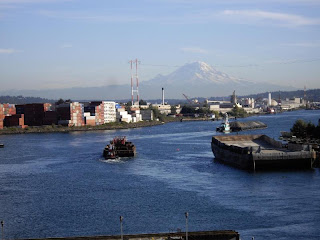 Later, as I rolled into Renton, I turned off Grady Way onto the bike path by the Waste Water Treatment Plant and was greeted by yet another pretty scene, as the sun was now low in the sky, giving off a wonderful golden glow to everything. I remembered Machka's "First Day of Spring" post earlier, so stopped to grab yet another pretty shot of the LAST DAY OF SUMMER-2009! 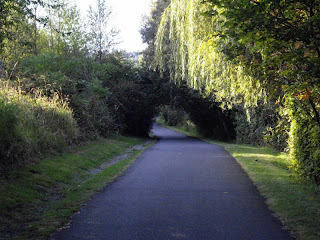 Though this week is supposed to be in the 80's it won't be long now before we are pulling on all the layers of wool, booties, rain jackets, ear warmers, long gloves with wool fingerless 'overgloves' and heading out looking like Ralphie's little brother in his snowsuit in that wonderful Christmas movie. For now, however, I'm sure digging the first day of autumn that more resembles mid-July except for the shortness of the daylight hours.

WELCOME TO AUTUMN!!
Posted by Donald Boothby at 9:05 PM No comments: Links to this post