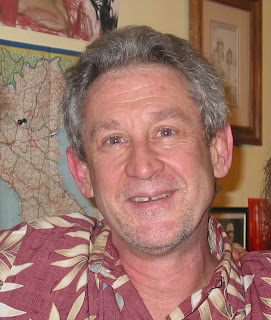 
Donald "Raleighdon" Boothby of Seattle, born December 3, 1950, died July 18, 2012 of esophageal cancer. He often described himself as the richest man he knew, because he was surrounded by love, lived life with joy, and left the planet with no regrets. He was boisterous, irrepressible, romantic and generous, with an infectious smile and attitude. He had a quick wit and an irreverent sense of humor.

He was passionate about cycling, playing the fiddle, and baking pies. The intensity of his joy in these hobbies inspired many to take them up. He cared deeply about his family and friends, and was a spiritual mentor to many. He is survived by his wife Mimi, sons Josiah, Tom and wife Megan, his daughters Elena Gianello, Elena Verdolini and Renin Oliver; his mother Evelyn, siblings Christine Faubion, David, Michael, and Robin Pierce, a large extended family and innumerable friends.

A potluck celebration of his life will be held at 1:17pm Saturday, August 11, at the Garden House, 2336 15th Ave S, Seattle Gifts can be made to Donald's fund to get exercise bicycles for Swedish Hospital https://community.swedish.org/donaldboothby

This post done by Mimi Boothby - it is his obituary that was published in the Seattle times on July 22, 2012 FYI, he only actually had two sons, but he "adopted" the two Elenas and Renin with his typical generosity. I am sure if he had lived longer, he would have adopted more.
Posted by Donald Boothby at 6:20 PM

I was so sad to find out about Don.
I communicated with Don last October to find out that he was having/had had surgery.

Last night I finally got around to looking at his Bike Journal log to find that no rides had been registered since May. My heart sank....

I never met Don in person. (I live in Perth W. Australia) When I logged my first 300km ride in 2008I was pretty pleased with myself and thought that I must surely surpass Don's total for the year to date....only to find the next day that he had logged a 400km Audax brevet!

This Saturday 18th August I will be riding a lone 400km brevet as a tribute to Don.

RIP Don and condolences to Mimi and all of the extended family.